9. When biology is bigotry, feminism is hate speech

According to transgender activists, because less than one percent of people experience sex dysmorphia, and because those people are vulnerable to depression and male violence, the rest of us must accept (or at least politely pretend) that there are male and female brains, that our brains - not our potential reproductive role - determine our sex, and if you disagree with this, it must be because you hate transsexual people, not because you understand 1) how babies are made and 2) how words work.

According to this blogger, knowing that human beings are sexually dimorphic is misogynistic, racist, and fatal: What Does a Woman's Body Possess That Makes It a Woman's Body?

In this Twitter exchange, Laurie Penny likens knowing that penis is male to racism and homophobia.

In this article, Owen Jones says, in response to the statement that transwomen are not biologically female, "It is my firm belief that in generations to come we will look back at such commentary as we do now on discussions of women, gays and black people in the magazines of the 1950s."

A site that has the gall to call itself "Everyday Feminism" implores women to stop using terms like female-bodied or male socialized (!!!) 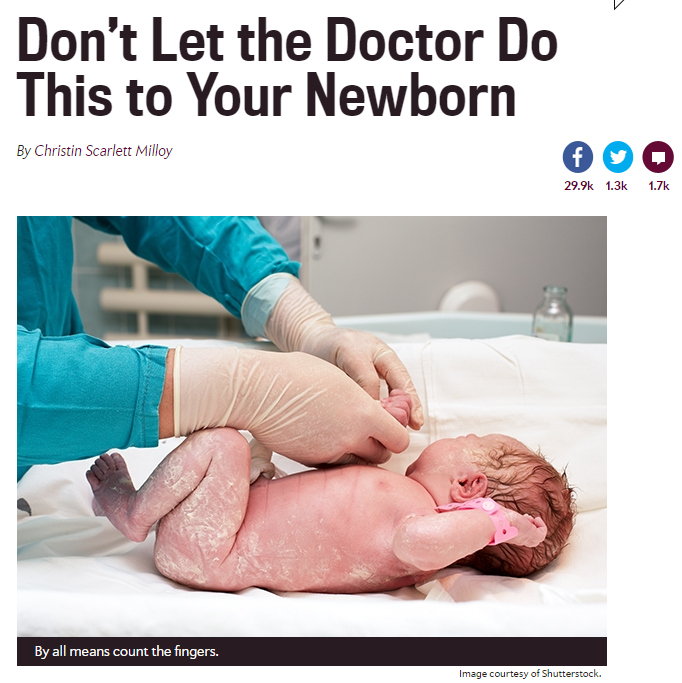 An impassioned screed against letting a doctor identify your baby as a girl or a boy, written by someone who thinks people who have procreated can't tell the sex of their babies without the assistance of a medical professional, and anyway they should wait until their children are three years old and can tell them what "gender" (meaning sex) they "identify as."

Some more examples of the biology-is-bigotry fever taking over the Left: 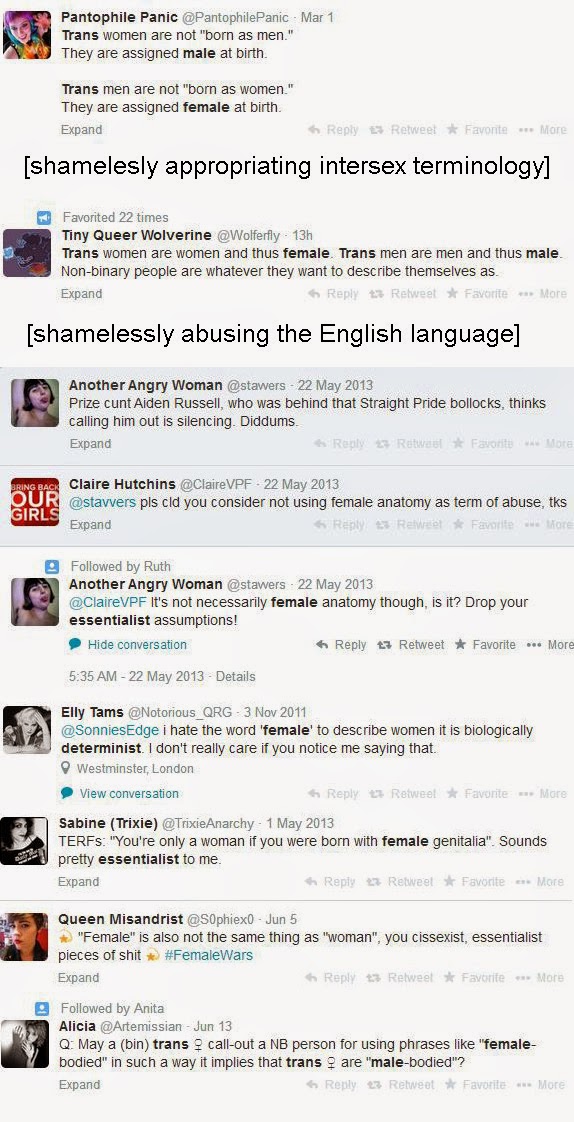 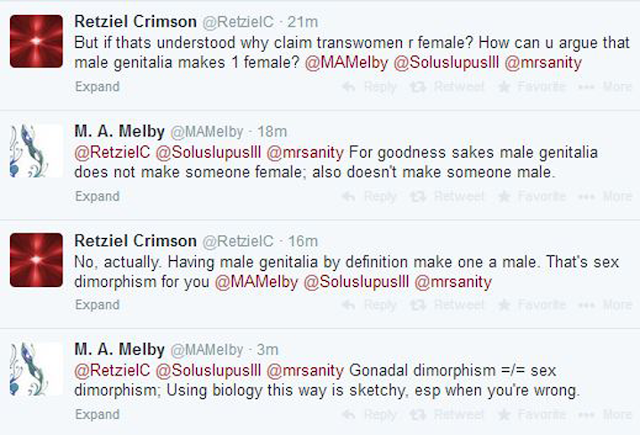 To hear transgender activists tell it, transwomen are surrounded by a crackling, deadly energy called "transphobia," which is not, as the word might suggest, an irrational fear of transsexual people - but instead denotes any refusal by feminists to go along with the idea of biological sex as a self-identified feeling rather than a material reality. This insistence upon naming the reality of femaleness and maleness (supposedly) kills, both by causing transwomen to commit suicide, and by causing men to commit violence against transwomen. 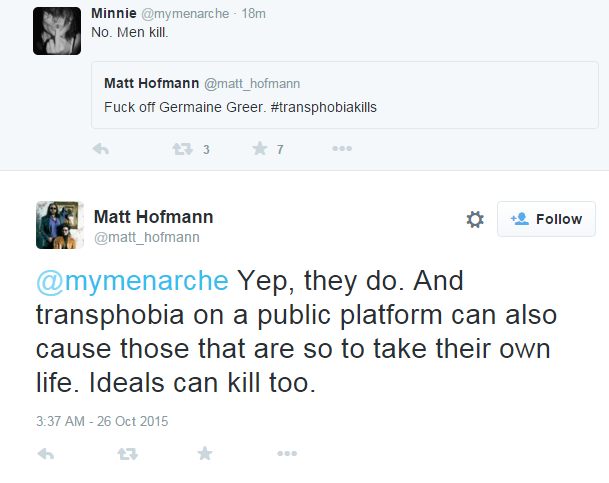 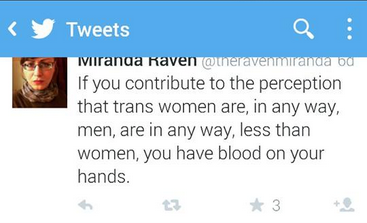 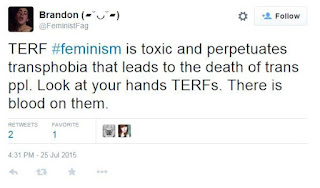 Sex dysmorphia is a painful psychiatric condition, and those who suffer from it deserve caring and effective treatment. However, silencing the feminist analysis of sex vs. gender will not help anyone – many trans-identified people gain comfort from that analysis, which locates the cause of the abuse they receive outside of themselves and allows them greater self-acceptance. Consider also the malignant narcissism of suicide threats - generally, "pretend up is down or I will kill myself" is a warning sign of potentially abusive and/or violent personalities. Consider also the harm done by those who callously weaponize the suicides of young trans people in order to blame feminists for male suffering.

Regarding the external violence transwomen face: poor transwomen of color - many of whom are trapped in street prostitution - are killed by men. Yet middle class white heterosexual transvestites (many of whom fetishize prostitution as a glamorous occupation) appropriate their suffering and weaponize it in order to blame [male violence against other, gender non-conforming males] on feminists. It’s absurd.

Read this transwoman's comprehensive takedown of "the appropriation of black and hispanic trans deaths by white trans women and political opportunists" - it's fantastic.

Furthermore, the only way you can believe that [forcing the thought-terminating cliche "transwomen are women" on feminists] will [protect transwomen from male violence] is if you believe 1) violent men listen to feminists, and furthermore 2) those same violent men would not harm anyone they perceive as a woman. 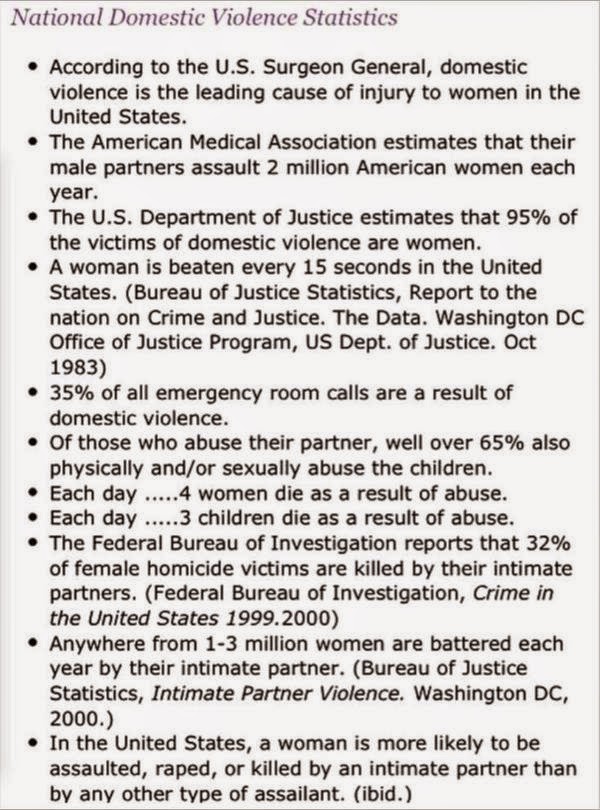 Blogger "she wolf" shows her math on other stats:
Rebecca Solnit examines "a pattern of violence against women that's broad and deep and horrific and incessantly overlooked" - A Rape a Minute, A Thousand Corpses a Year

Laura Bates: Women are being assaulted, abused and murdered in a sea of misogyny (Apropos: "Every day, according to the charity Refuge, almost 30 women attempt suicide as a direct result of experiencing domestic violence. Every week, three of them die.")

And a transwoman writes:

The idea that women are pampered princesses protected from evil trolls by valiant knights is a genderist fairy tale that erases the utter mundanity of male violence against women. No adult who professes to be a feminist or feminist ally should perpetuate it.

The problem here is not that we know penis is male. The problem is that we live in a world that equates maleness with masculinity and thereby both encourages and excuses male violence against other, non-masculine males. The problem is gender.

[Also: a clarification on that 1 in 12 figure that’s all over the Internet – from the transwoman who came up with it; a statistical take-down of that figure from PolitiFact; and two more skeptical takes from feminist bloggers culturallyboundgender and athenatalks.]

Here are some of the more common derails:

No. The simple act of classifying human beings by sex does not assign to either sex any innate dispositions nor pre-determined behaviors. (In a typical reversal, transgender identity politics rely on the idea of a "female essence.”)

2) Categorizing human beings by potential reproductive role is sexist and as an act of bigotry is comparable to racism and homophobia.

Transgender activists don't seem to be able/willing to separate out the social treatment of a difference (sexism) from the difference itself (sex). Thus anti-sexism is reduced to a polite (though rigidly enforced) pretense that an obvious difference doesn't really exist. Sounds like a conservative parody of progressive politics to me!

I never thought I'd have to clarify this to people on the Left, but: it is not the aim of feminists to force men to pretend women don't have the ability to create new life. It is the aim of feminists to destroy the absurd but deeply ingrained idea that our ability to create new life should somehow render us second class citizens.

See here for an extended take on the intellectual insincerity of the modern Left. For now, I will simply point out that every time some ninny compares the statement "penis is male" to [something racist] or [something homophobic] they expose their own opinion of both racism and homophobia as obvious truths, which are only rude to proclaim out loud in mixed company.

No. First, whether or not you let us name our bodies, we still live in those bodies. Second, our bodies are not shameful. The power to create life is not shameful, and furthermore, women are full, entire human beings. We do not have to choose between our sex meaning everything or nothing, any more than men do. 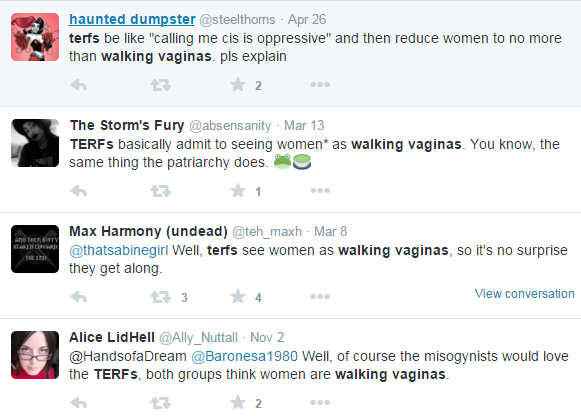 Funny how all the other parts of the female reproductive system - the ones not involved in penile penetration - are always left out of this meme. Funny also how no one is telling men who claim the category "male" that they are reducing themselves to walking penises.


The problem here is not that we know women are female. The problem is that we live in a world that equates female with "subhuman" and thereby excuses men for subjugating women. The problem is gender.

Feminists are also told that to posit femaleness as an axis of experience/oppression is racist, because white women and women of color will have different experiences.

Of course, sex is the only class subject to such ridiculous treatment.

Transgender activists will point to infertile women as evidence the word "woman" shouldn't denote reproductive biology, but they do not decry the labeling of humans as bipeds because some people are amputees. Nor are they offended by the notion that humans have five senses, although some people are deaf or blind.

Transgender activists will also point to intersex people in order to claim sex is a "spectrum." However, they do not claim white people can identify as black because some people are bi- or multi-racial. The existence of purple does not mean that red is blue. (Nor does the persecution of albinos in Tanzania mean the only truly oppressed black people are white-skinned.)

This is all -very, very obviously- about refusing to allow women to name ourselves so as to kneecap our ability to 1) enforce sex-based boundaries and 2) analyze sex-based oppression.

Feminists should not have to spend our time and energy defending the very definition of the word woman. So we must ask ourselves, why is this happening? 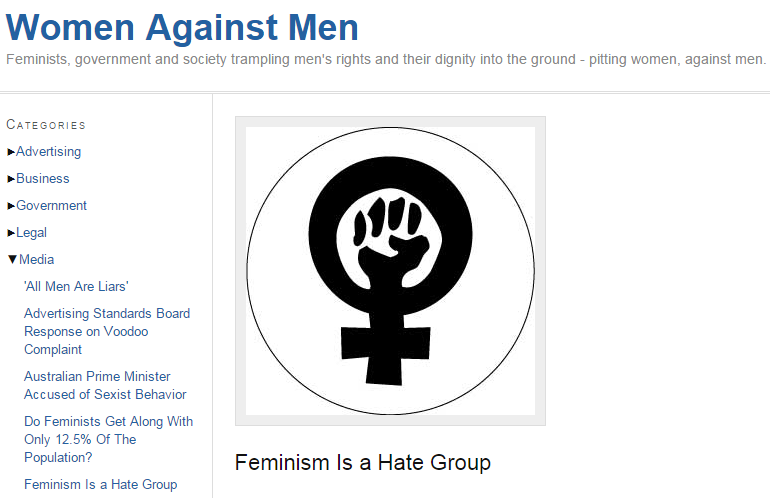 MRAs are all over this.


None of this is purely academic. Next page: The harms of transgender identity politics.