5. "Woman" is a feeling: brainsex and female penises 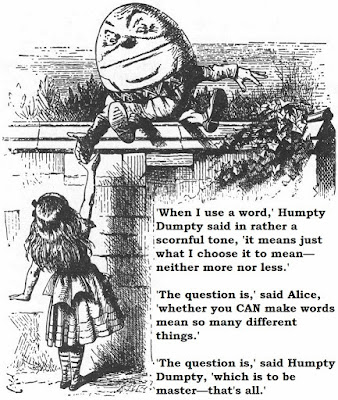 Pursuing a clear definition of "transgender," or "trans*," or just "trans" is likely to get you accused of ignorance /bigotry/ hatred/ phobia/ violence - and that should be a warning sign.

A common definition is "someone who doesn't feel their body matches their gender." Obviously, how you interpret that definition will depend on how you are reading the word "gender."

If you are accustomed to using the word gender to mean "biological sex category of male or female," and have therefore been reading "transgender" as a polite replacement for "transsexual," you are in for a (rude) surprise. Transgender activists dismiss both sex dysmorphia and any process of transition as necessary to the label "trans." 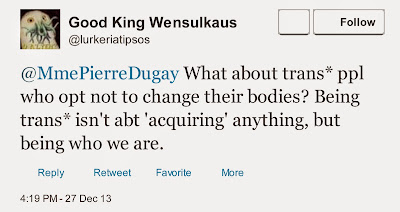 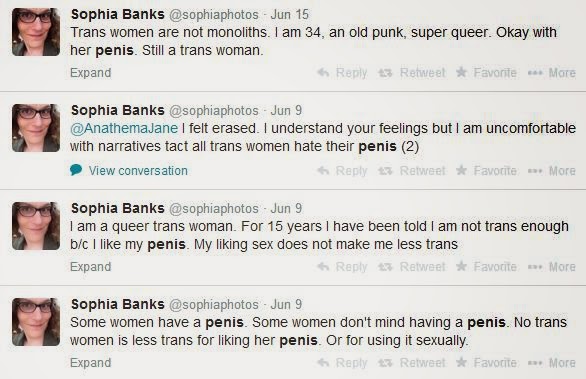 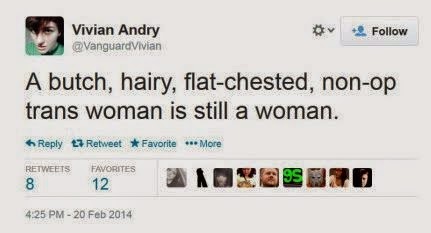 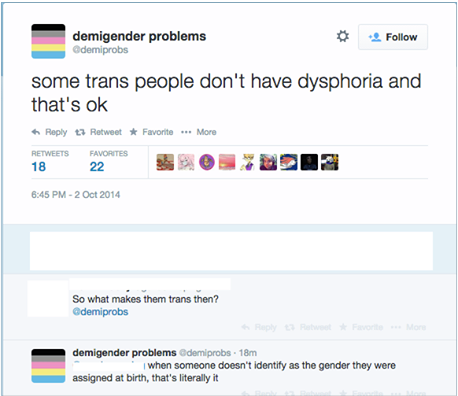 Alternatively, they might be called Uncle Tom or quisling or TERF: 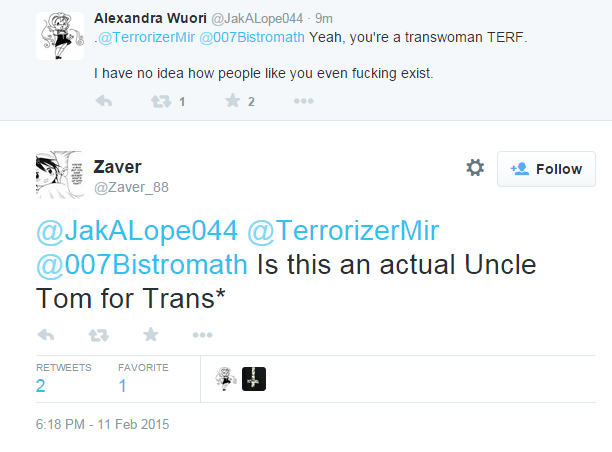 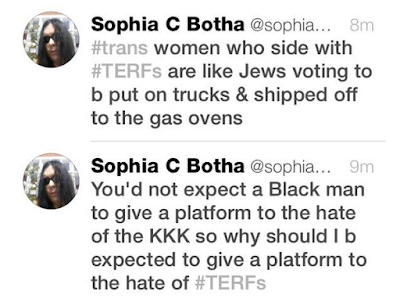 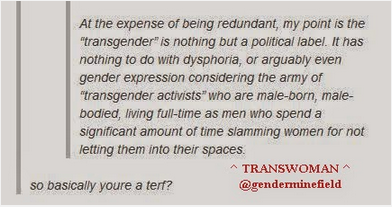 Or maybe they'll just be instructed to kill themselves: 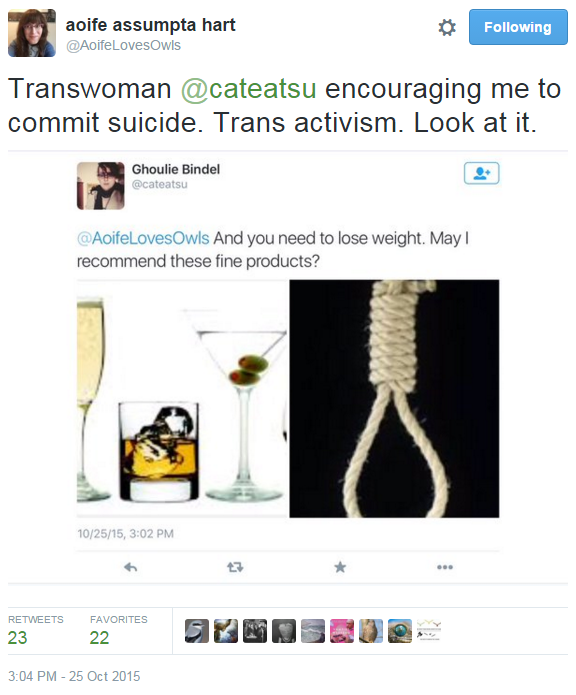 Transgenderists don't use "gender" in the feminist sense either, of course - no feminist is going to say women "match" our assigned [gender role/sex stereotype.] In addition, a great many people feel they don't "match" their gender role, but if you point this out you will be told it's much more complicated than that, and it varies, and SHUT UP.

"Trans activist" Sophia Banks clarifies that what we're talking about here is brainsex: 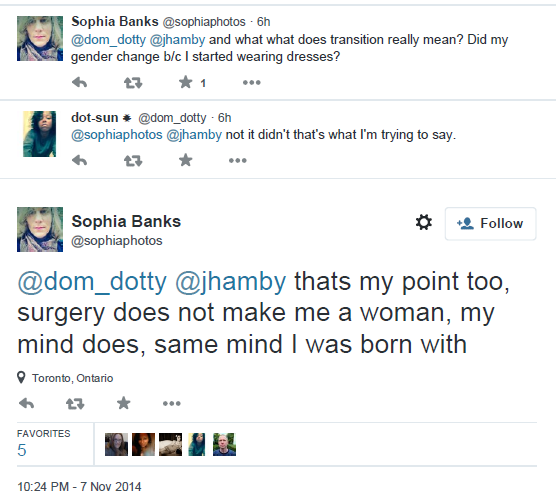 More on gender as brainsex:

The idea of ladybrain, of course, was used to exclude women from education and public life for centuries, and continues to be used to justify sexism worldwide. The modern-day fight is against "neuro-sexism," see: Cordelia Fine's Delusions of Gender and Rebecca Gordon-Young's Brainstorm. Brainsex is bigoted pseudoscience, just as brainrace is bigoted pseudoscience.

Furthermore, brainsex in this context has no consistent inner logic.

If your thesis is that male humans and female humans have different brains, you must define male and female and those definitions must STICK. Male = sperm producer. Female = ova producer. The existence of males/sperm-producers who supposedly have "ladybrain" means THAT'S NOT A LADYBRAIN. 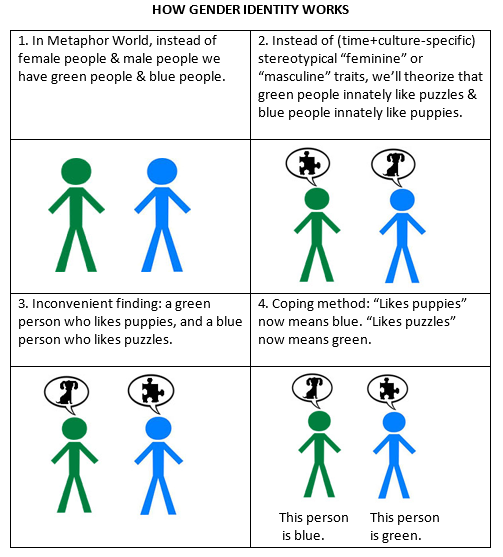 THIS COPING METHOD OF CHANGING YOUR DEFINITIONS TO DISGUISE THE FAILURE OF YOUR HYPOTHESIS IS NOT COMPATIBLE WITH THE SCIENTIFIC METHOD.

Further furthermore, ladybrain is not diagnosed via brain scan; it is simply a self-professed feeling, bordering on spiritual:

"Gender is between your ears" - a statement as popular as it is daft. There is no way to meaningfully differentiate this concept from HUMAN PERSONALITY, but if you point this out, you will be labeled a bigot. I wrote on page 2 about the reversals that are central to patriarchal thought - men will envy women's reproductive power but call us weak, treat us like servants but call us royalty. The neo-patriarchal theory of transgender identity is also built on a reversal - it takes the feminist analysis of gender and turns it on its head. Gender is no longer a coercive social system meant to make us believe that sex determines personality, but now refers to the belief that personality determines sex. Either way, personality and sex are supposed to match.

And since gender-as-brainsex is an individual, internal, spiritual experience, women must take any male person's simple declaration of womanhood as Truth: 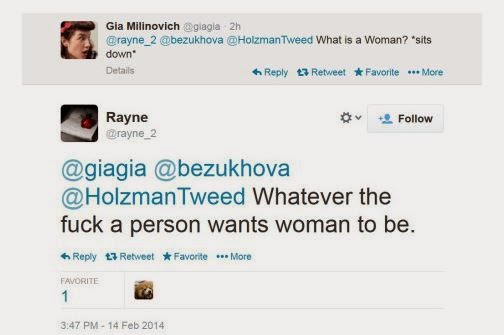 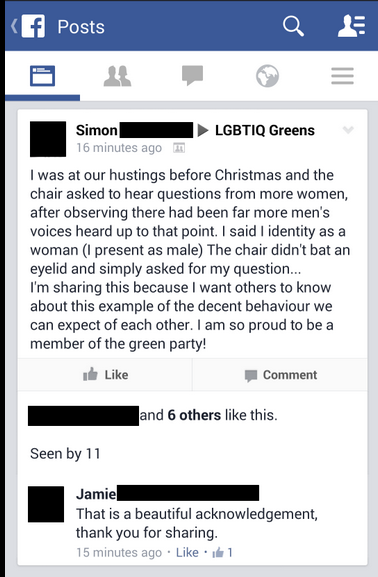 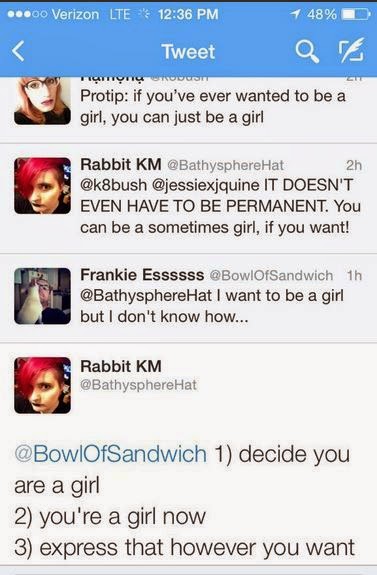 Indeed, the dominant narrative of transgender activists goes like this: 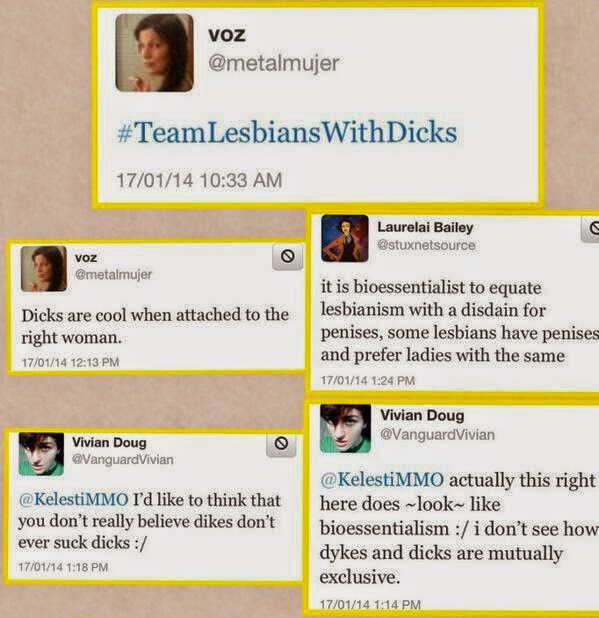 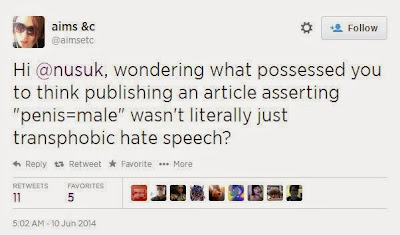 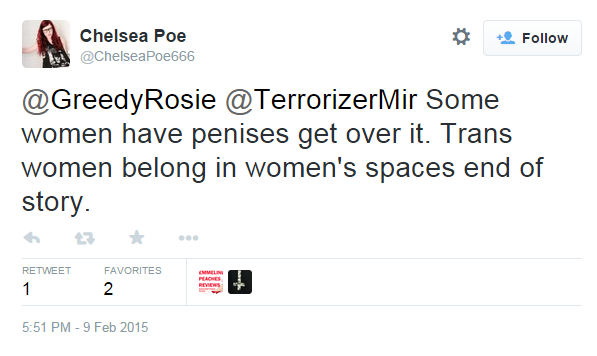 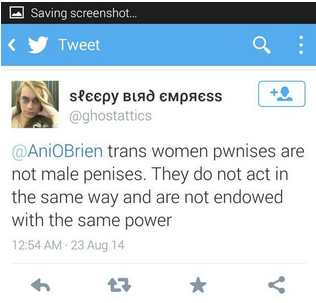 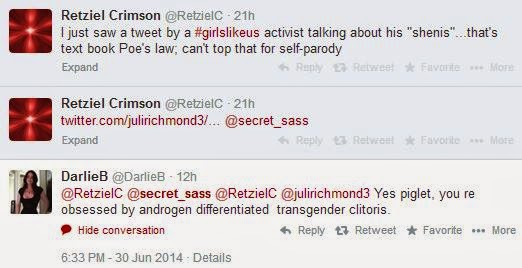 It doesn't seem like these people have any problem with their sexed bodies. It seems like they just want to force other people to call them women/ their penises female?

These "transgender women" might adopt feminine clothing and styling, they might or might not undergo hormone treatment and/or surgery, but either way they are not men but women, not just transwomen but women period, not just women period but biologically female and furthermore they have always been female, all because they say so. 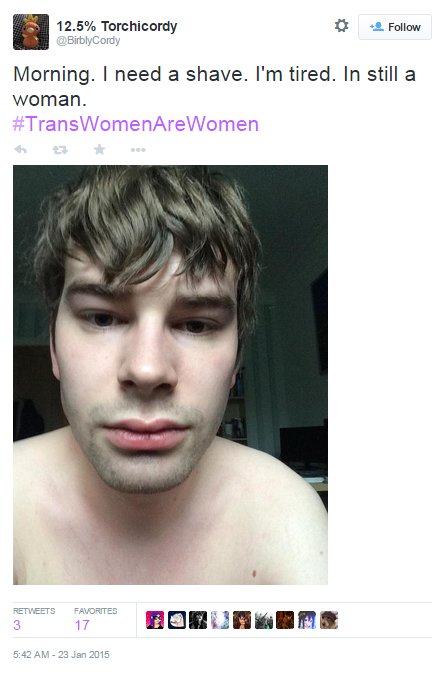 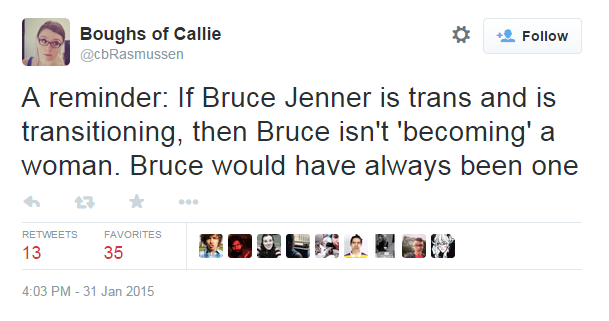 (Until they say they aren’t, for example: Don Ennis)
(Or maybe only sometimes, for example, "Vivian:")

If you find all this confusing, that's because it is meant to be confusing. If a male person claims the label “transgender,” they might be a transsexual who is sincerely pursuing or has already undergone medical and social transition, or they might be a part-time crossdresser. You can’t know and you aren’t allowed to ask. To question any male person's stated "identity" is VIOLENCE: 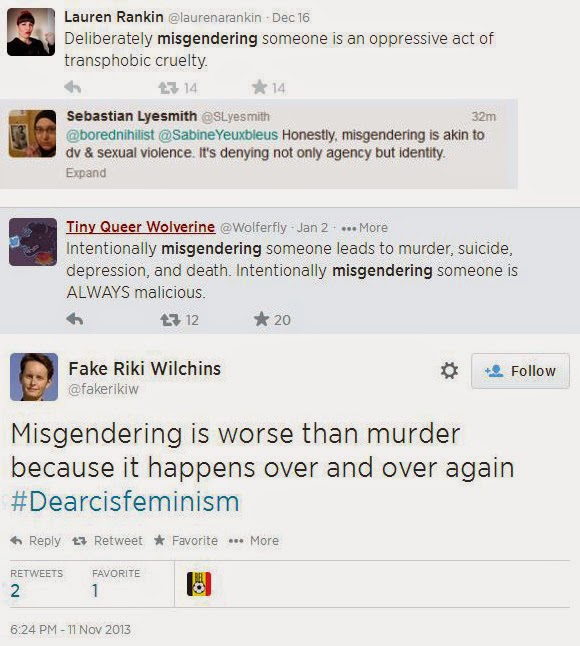 So: If you are a male person (who loves his penis), and you are privileged along several other axes such as race, class and sexuality - but you want your shot at winning the Oppression Olympics?

Step 1) Decide to "identify" as a woman.
Step 2) Appropriate the suffering of people with sex dysmorphia to emotionally blackmail everyone around you into complying with your "identity."
Step 3) If anyone dares to question your "identity," accuse your questioners of wanting you dead.

Tada, you have your Get Out Of Male Free Card.


Next page: What could "feeling like a woman" even mean?