"Cis" is a prefix from chemistry, ostensibly meaning "on the same side as." This is what transgender activists label anyone who is "not trans." Of course, "trans" is itself a moving target, and women who pursue a clear definition of "trans" are told that's not our place, even as we are told we must accept a label that means "not-that."

So what is the commonality that makes both groups of people women?

The answer, of course, is ladybrain: that male fantasy of femininity covered on pages 5 & 6. "Woman" now means ladybrain, not just in the special case of transwomen, but for all women.

"Cis" women are ladybrains who were "assigned female at birth."

"Trans" women are ladybrains who were "assigned male at birth."

(The"assigned at birth" terminology is co-opted from intersex experiences, and is meant to dismiss both the obviousness and importance of sex categories in humans.)

These prefixes cannot work without taking the one word we have for adult female humans, and re-defining it to denote sexist stereotypes that feminists have been fighting for centuries.

Indeed, when "cis" functionally means "comfortable with gender stereotypes," it is an odd and insulting thing to call feminists, who are devoted to deconstructing and fighting those stereotypes, not to mention lesbians and gay men, who are persecuted for failing to perform the compulsory heterosexuality that is central to the social construct of gender. Yet as a function of the trans/cis binary, if you do not identify as trans then you must accept the label "cis" and the uncontested relationship with gender stereotypes that implies.

Nevermind that the practice of individual women claiming some "inner maleness" will never solve the problem of sexism - if I declare myself to have "always felt like a man," I will not magically receive twenty years of back pay. Young women being subjected to FGM cannot escape by claiming a "male hypothalamus." Women who are pregnant when they do not want to be, with no access to abortion, cannot simply state "but I view my clitoris as a penis, thus deliver unto me full bodily autonomy under the law." Identity politics only work if you have the power to enforce your special feelings about yourself on others, a power that male people have over female people, but female people do not have over male people.

To add injury to insult, once labeled "cis," women must confess to a laundry list of imagined privileges that only reveal how little transgender activists know about women's lives. In transgender activists' fantasy worlds, women never encounter sexism in our medical treatment, we aren't belittled for failing to meet arbitrary beauty standards, we don't face violence in the family and on the street. Being a girl is like playing Life on easy mode. Being a woman means relaxing into the bliss of non-personhood. There is no female oppression.

And once labeled "cis," women become, by Orwellian linguistic magic, oppressors of any male person who claims transness. (Funnily enough, in this topsy-turvy worldview, female people who do identify as men - transmen - are men period, and thus also privileged over transwomen. There are no female people who are not privileged in relation to any male who claims the label "trans.") It doesn't matter if a woman is visually gender-conforming but experiences femininity as a compulsory expression of preemptive surrender to male dominance, and it doesn't matter if a woman is visibly gender non-conforming and is constantly punished for it. If a person 1) was born into a female body and 2) accepts the dictionary definition of the word "woman" - she is now the cis oppressor.

"Cis" is also a handy way for transgender activists to express their intense misogyny: 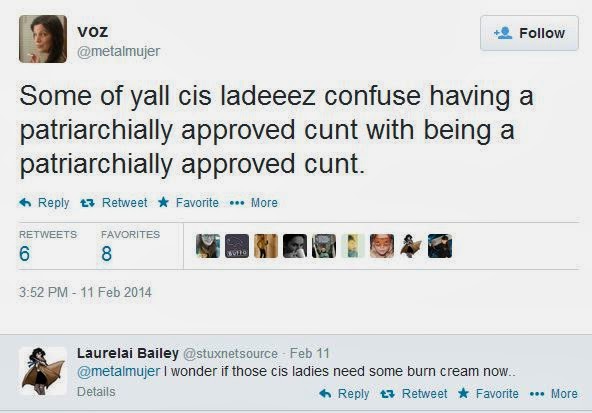 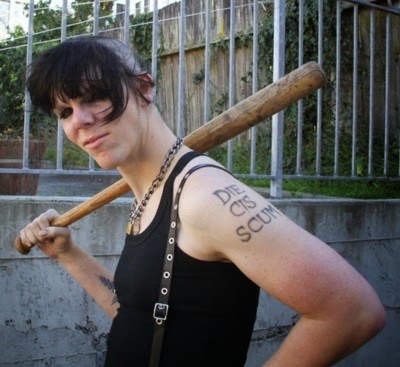 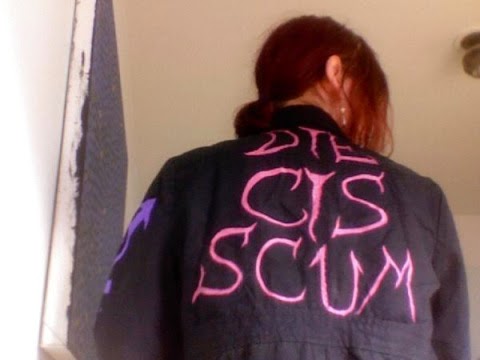 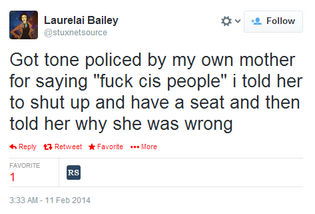 To cut through the newspeak and vitriol:

Transgender activists and their allies think 1) female people are privileged rather than oppressed via social treatment of our sexed bodies and 2) male people who don't live up to alpha male stereotypes needn't question masculinity but instead are oppressed by women. 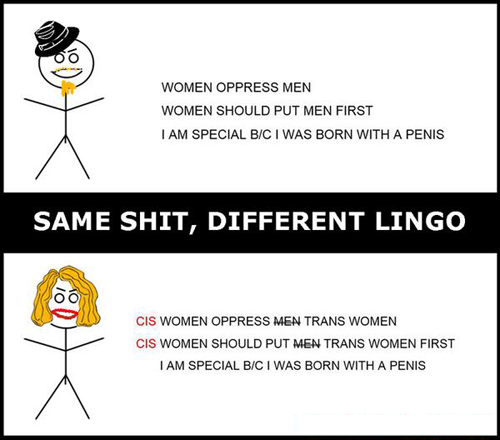 Later in this blog, I will have some strong words for the men who want to call themselves "cis," but for now here are two excellent essays and one twitter thread written by other feminists critiquing the term:


Next page: Women who resist are witches - burn the TERFs