First of all, the Left needs to get over its tendency towards knee-jerk sanctimony. We should carefully consider the issues at hand rather than rushing toward insincere performances of "more-tolerant-than-thou."

Secondly, the Left needs to get over its tendency towards lazy, reactionary, thought-quashing ideological totalism. No, "some women have penises and some men give birth" is not "the right side of history." No, "male people are not female" is not equivalent to "x group is sub-human." Stop making Leftists sound so damn dumb.

Then, Leftists need to honestly and intelligently confront the sexism that still underlies so much of our thinking.

As more women eschew traditional gender roles and pursue independent lives, men face a shrinking pool of free female labor. Yet men are still raised to believe such labor is due them for the simple fact that they were born with a penis.

Furthermore, conceptions of masculinity are defined in opposition to femininity, so as the feminine expands, the masculine contracts. Anything that is not-manly must be shoved in the Other/woman box. We can see this in the parents who would never think their little girls are “transgender” because they want to wear pants but who lose their ever-loving minds when their little boys want to wear dresses.

So men are resentful and insecure, and it's giving rise to a whole lot of misogynistic and homophobic backlash. All of which is conveniently excused because "men will be men," and who will dare say no to them?

I am saying NO, and I am asking all feminists and feminist allies to say NO.

The men of the Left need to accept some hard truths and let go of some easy lies. Here is what we must demand of them:

1. Accept that women are female people - neither of those words cancels the other out. Men are not the default human, and women are not defective men. We are not the mere absence nor malfunction of maleness, as we have all our own parts and all our own experiences. We are also not combination mommy-maid-whores created at the plastic doll factory, neither objects for sale nor costumes to wear. We are human beings born with female reproductive systems, in a world that assigns lifelong subjugation to the power to create human life. The shame is on the subjugators, not on our bodies.

2. Accept that women [as a class] can have babies and men can't. If men want to balance that out, instead of devaluing or erasing our reproductive work, they can do more childcare.

3. Let go of the sexist idea of ladybrain (and its unspoken corollary, manbrain.)

4. Let go of the fiction that we need men’s individual protection or financial support when really we just need men as a class to stop attacking us and discriminating against us.

5. Let go of the fantasy that being forced to trade our [emotional, sexual, reproductive and domestic] labor for men’s protection and financial support is some blissful retreat into childlike dependence. There is no escaping from masculinity into femininity - women's oppression is not a vacation.

6. Let go of their entitlement to women’s bodies and labor. Female-assisted orgasms are not a male human right, and feminists are not the mommies of the world.

If men want to reclaim the humanity that masculine socialization stole from them, good. But they cannot give up masculinity without giving up male privilege - including the privilege to define "woman" however it pleases them.

Instead, men need to re-define "man."

Instead of expecting feminists to facilitate their orgasms and nurture their egos, men could consider feminists as role models for the hard work of fighting gender. Feminists have been researching and writing and speaking and campaigning about the harms of gender for decades, and if men haven't paid attention because those feminists were just women, after all, and some of them even dared to be lesbians or fat or old – well then, men might want to consider that women have wisdom entirely unrelated to our ability to inspire their erections. Men: Stop acting like pornsick adolescents. (And for heaven's sake, stop watching porn, which assigns masochism to femaleness in order to excuse males' sadism.)

Furthermore, any man who truly believes in liberation from gender roles should want every male child to grow into his full human personality - no matter how "feminine" that personality may be - without being subject to either physical violence or the psychic violence of being told he was born into the wrong body.

It is vital, in fact, that "man" comes to mean *only* adult human male, with thousands of ways to inhabit a healthy, happy male body, none of which are dependent upon the exploitation or bullying of others.

8. Therefore, men need to confront and defuse male violence, instead of leveraging it to silence women.

Gender is a system of power relations and abolishing it will require men to give up power. Stop blaming women for the horrible things men do when their power is threatened. Start holding men accountable.

Gender is the problem, not the solution.

Use your words. Don't let them stop you. 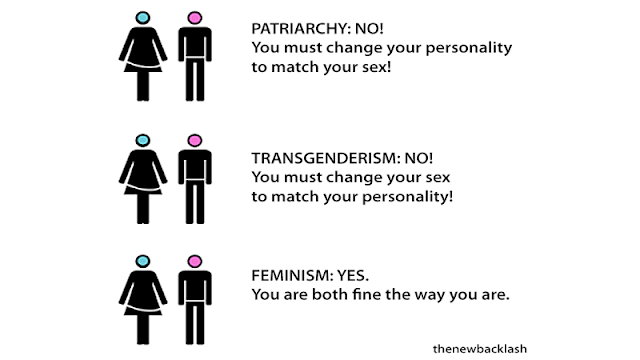